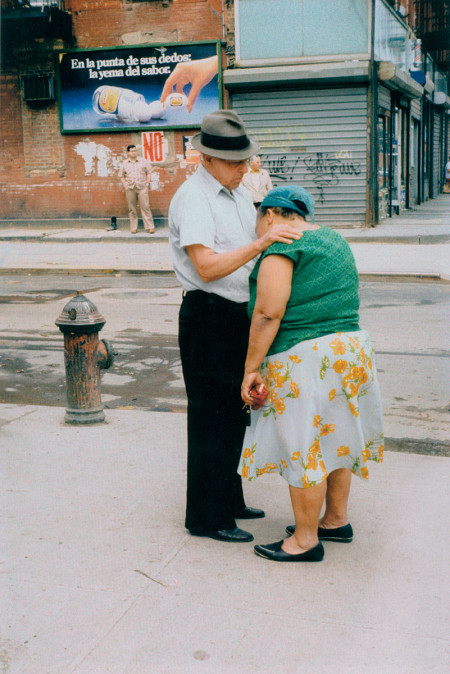 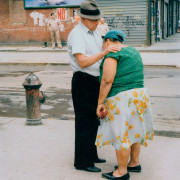 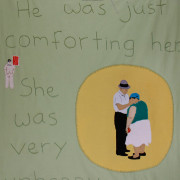 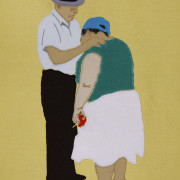 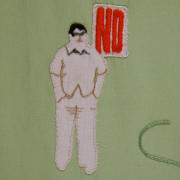 In 2008, I was invited to present an image of personal significance at REDCAT theater in Downtown LA as part of X-TRA Contemporary Art Quarterly’s event 1 Image, 1 Minute.

At the time, I was poring over a 2008 monograph of Helen Levitt’s photographs, based on an exhibit at the Sprengel Museum. There was one color image that I couldn’t forget. On November 25, 2008 I interviewed Helen by phone about the picture. Less than a year later she passed away at the age of 95.

I presented that image as a dialog between Levitt and me. Artist Bill Jones played me, and I played the part of Helen.

Later, I created a craft project based on the photograph—this was the beginning of a series of textile pieces made as tributes to street photographers whose work I love.

Interview with Helen Levitt on November 25, 2008
AM: What is the date of the picture?

AM: Where was it taken, Spanish Harlem?

HL: No. It was downtown, on the eastside somewhere.

AM: when you were editing your film, why did you choose it?

HL: I liked it. That’s all. Why do you like it, why did you choose it?

AM: It’s what I like about a lot of your photographs. I feel like the compositions don’t get in the way of the subject…they give the subject room to breathe…

HL: Yes, I agree with that.

AM: And the color and grain of the image is also something I love. It’s film-y. The saturation in particular…

AM: For this…were you using a right angle viewer?

HL: A what? No, only with the horizontals. If it’s not a horizontal, I didn’t use it.

AM: What was going on in the image, with the subjects, do you know?

HL: No. He was comforting her. She was very unhappy, obviously.

AM: Did they respond to you? Did they know you were photographing them?